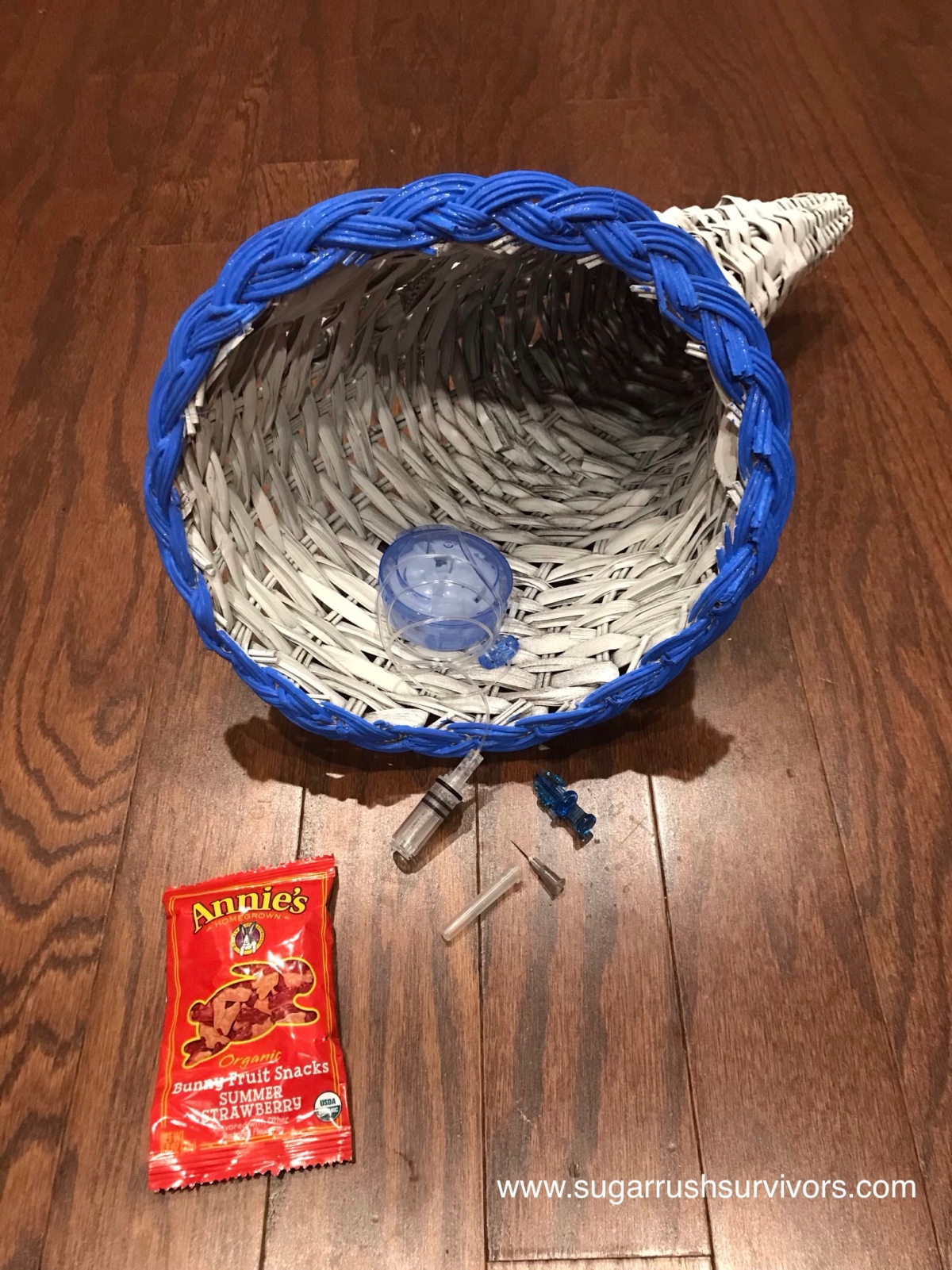 While I am still getting ready for Halloween, I’m also looking forward to our diabetes awareness efforts for November. We participate in Project Blue November by wearing blue on Fridays and posting on social media. Last year I painted a craft pumpkin with the international symbol for diabetes, a blue circle. We collected all of Grasshopper’s used diabetes supplies and empty packets of Annie’s Fruit Snacks in the pumpkin to show all of the supplies and low blood sugar treatments he used. 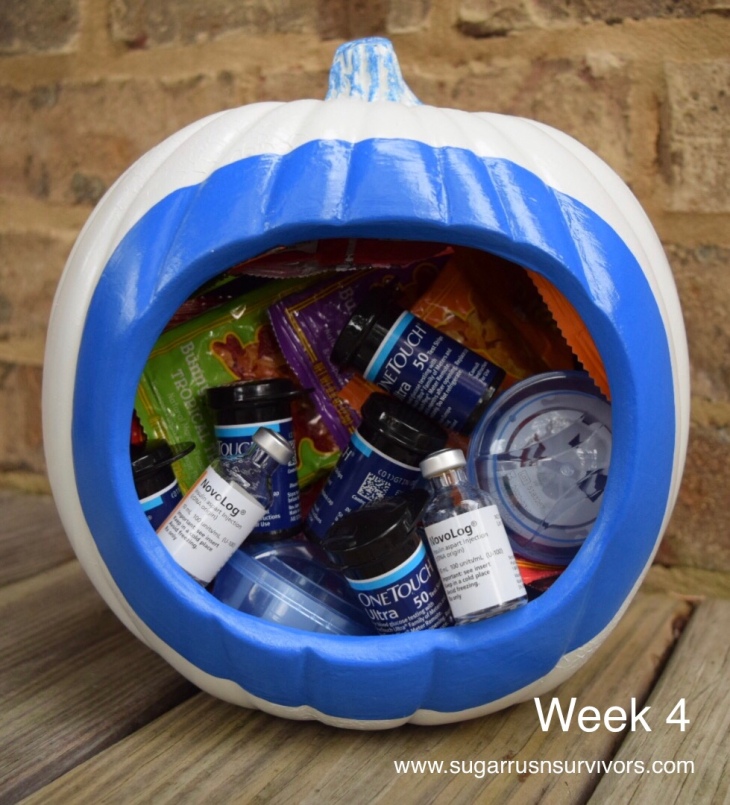 At the end of each week I took a picture of the stuff that keeps Grasshopper alive. By the end of the month it was overflowing.

My point was to offer an alternative sort of awareness campaign. In T1D support groups online there are often suggestions for Halloween pumpkins painted blue for T1D awareness. While I am enthusiastic about T1D awareness, I don’t want to confuse families who come to our house. Many families who have children with life threatening food allergies enjoy trick or treating safely because of the hugely popular Teal Pumpkin Project.

This project encourages people to support these children and families by offering non-food treats like bubbles, glow sticks, erasers, pencils, stickers, bouncy balls, and many other low cost options. These treasures may be offered instead of candy and food treats or in a separate bowl if you choose to hand out both options. Click here to see what non-food treats we offered in 2017 in addition to candy.

I posted photos of my blue circle pumpkin on T1D Mod Squad and an interesting discussion happened. Cornucopias were suggested as a container instead of a pumpkin. I love that idea! The cornucopia is a horn shaped basket that, in North America, has come to be associated with autumn, a plentiful harvest, and Thanksgiving. It is a symbol of abundance and nourishment that has its roots in Greek and Roman mythology. It is a well known modern autumn centerpiece overflowing with fruits, nuts, and vegetables. It fits well with the idea of gathering and displaying Grasshopper’s diabetic supplies. While I wish that no one had to deal with T1D, I am daily grateful for the insulin, supplies and low blood sugar snacks that we have that keep our boy alive.

Alese did the leg work online and helped me find a cornucopia at Party City that was big enough. It was only $7.

The random Coke bottle is for scale.

I did some late night crafting with materials we had on hand, white spray paint and blue acrylic craft paint. 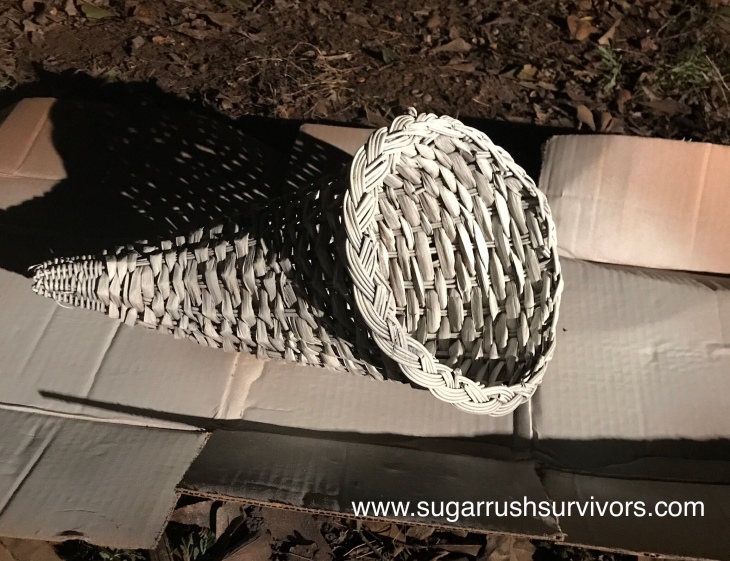 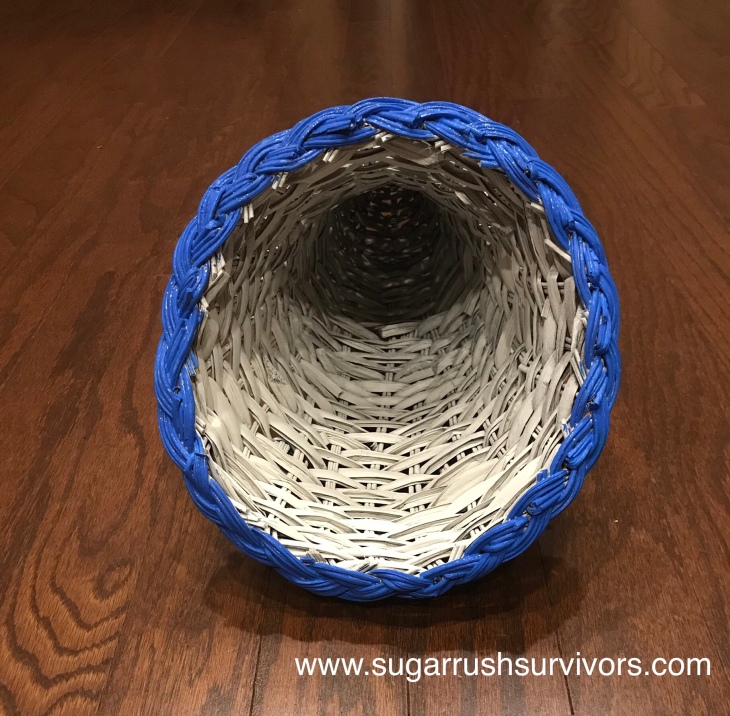 Voila, we have our T1D awareness cornucopia! For the month of November we’ll be collecting all of Grasshopper’s supplies and sharing a photo at the end of each week.

Use this suggestion during the month of November to show the world just how much stuff is needed to stay alive with type 1 diabetes. Or create your own! Will you share with the world what it means to you?